This week, on behalf of our members, the Pennsylvania Chemical Industry Council sent a letter to each Pennsylvania legislator to voice opposition to House Bill 11 and Senate Bill 510. This proposed legislation would increase all consumer electric bills, including those of the state’s chemical and petrochemical manufacturers.

According to an analysis by the Industrial Energy Consumers of Pennsylvania, if nuclear power generation were to be added to the Alternative Energy Portfolio Standard, the state’s industrial consumers would face at least $192 million in additional electricity costs annually.

Deregulation in Pennsylvania has allowed competitive markets to drive energy prices, which has resulted in consumers, including our members, benefiting from new and more efficient electric generation sources. It also has allowed consumers, rather than utility companies, to drive the market.

The economic advantage of new energy resources has spurred billions of dollars of private investment in Pennsylvania’s $24 billion chemical industry. These investments have energized communities all over Pennsylvania — the state’s chemical industry supports more than 80,000 jobs, generating more than $410 million in state and local taxes and $933 million in federal taxes yearly.

With the right policies in place, more investment and job growth will be realized.

PCIC members appreciate nuclear power’s role in our electric grid and the benefit of a diverse energy portfolio; however, all plants but Three Mile Island (TMI) remain profitable and competitive, and PJM Interconnection, the electric grid operator, forecasts no change in reliability upon TMI’s retirement.

If this legislation were to be passed, Public Utility Commissioner Andrew Place stated, “... the subsidization of such a significant portion of the wholesale energy market would be distortional to competitive market prices.” Place noted that the legislation does not provide certainty that threatened nuclear plants will not close (continue reading).

Essentially, it would leave little of the electric market to competitive choice, negating the benefits realized by electric deregulation. A free market approach to energy benefits the consumer, while driving private investment in innovation.

While the Alternative Energy Portfolio Standard provides a government-mandated “leg up” to renewables, the Legislature chose at that time to support new and emerging alternative technologies, not recognized industries, so they would have the opportunity to become established within the commonwealth.

PCIC’s members support advancements in carbon emission reductions; however, the nuclear industry in Pennsylvania does not represent new and emerging advancements in renewable technologies, and carve-outs simply would prop up individual power plants that are no longer economically viable, using taxpayer dollars better invested elsewhere.

The opportunity for chemical and petrochemical manufacturing growth in the region is projected at $36 billion in new capital investment and 100,000 new jobs by 2025. As the state works to attract these energy-intensive users, energy costs, policy and regulation will play a critical role in securing or deterring investment.

With more than $1 billion in profits projected for 2018-19, Pennsylvania’s nuclear industry, as a whole, is not at risk. Pennsylvania’s competitive electric market is working, and we ask our representation in the Legislature to protect consumers by opposing House Bill 11 and Senate Bill 510.

An outpouring of stories and support have flooded social media in response to the 2019 Feeding Tube Awareness Week.

Caregivers of children, seniors and loved ones managing complex health challenges coalesced around a product that is making life possible. That product is feeding tubes.

Feeding tubes and enteral feeding offer nutritional support to adults, children and infants who are unable to perform the physical function of eating.

This product is typically made of polyurethane, polyvinyl chloride or silicone. The pliable, yet durable characteristics of these chemicals make them a high performer for this application as feeding tubes must have the ability to be bent, while being strong enough to avoid kinks and resist the corrosive effects of stomach acid.

Second only to polyethylene, polypropylene and polyvinyl chloride are the most widely produced commodity plastics.

The raw materials used to create these chemicals are petroleum and natural gas liquids, like ethane and propane. These materials are refined in the petrochemical manufacturing process to create the polypropylene or polyvinyl chloride.

These chemicals are the building blocks to products we use daily, with key applications across the healthcare, construction, electronic, automotive and packaging industries.

Single use plastic products are key in healthcare and hospital settings as they can come individually packaged, are sterile and can be made transparent so that fluids can be monitored by their administrator.

These qualities make feeding tubes a life-saving solution for the more than 400,000 individuals in the U.S. using enteral feeding.

We are proud to represent an industry that creates the critical products to improve the quality of life and health for so many deserving patients in a healthcare or home setting. 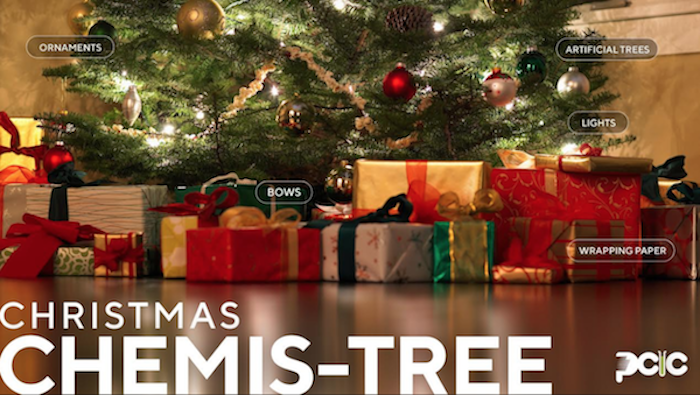 ’Twas the week before Christmas, when I looked all around
And realized it’s the chemical industry that makes cheer abound

The manufacturing of chemicals and the chemistry of their applications make up the vast majority of the products we rely on every day. And the holidays are no exception.

Whether you’re trimming the tree, wrapping presents or enjoying time with loved ones, consider how the chemical industry plays a role in that holiday magic.

1. Christmas trees: Increasingly, consumers are switching to synthetic or artificial trees as an environmentally conscious choice or for the ease of assembly and maintenance. Synthetic trees rely on chemical engineering and are typically made from polyvinyl chloride, steel and aluminum.

2. Candles and essential oils: If you go the synthetic tree route but miss the smell of pine, a scented candle or oil diffuser created by chemistry can remedy that. Most candles are made from a combination of hydrogen and carbon, and most essential oils consist of terpenoid molecules that are modified to control evaporation, dissolve rates and shelf life.

3. Ornaments: Most of our tree accessories are made from glass with a coating called silvering solution that is applied to the inside to create that cheery glow. The tops of ornaments and the hooks used to attach them are often made of tin or aluminum.

4. Lights: With copper for the wiring, argon for the casing, tungsten for the filament and polyvinyl chloride for the wire covering, the lights that trim your tree and light up Candy Lane are a fine example of chemistry from the inside out.

5. Wrapping paper: Manufactured from wood pulp, wrapping paper is finished with pigments, inks and dyes that make up the bright patterns.

6. Toys: As you navigate the Legos strewn about the living room floor or wrestle to release a new toy from protective packaging, think fondly of the chemical industry. Acrylonitrile butadiene styrene is a sturdy and tough plastic used to make many classic plastic toys, and you can thank low-density polyethylene for the lightweight and flexible protective packaging that safeguarded that newly cherished toy from manufacturer to play time.

7. Christmas dinnerware: Hosting this year? Disposable dinnerware makes cleanup a snap, and much of it is recyclable. Check for the No. 6 recycling label, so these holiday time-savers can be put to use again!

8. Fireplace cheer for the fire-starting challenged: Starter logs, which are often made of recycled materials, wax and the polysaccharide cellulose, are a helpful tool for building a fire. And for those who simply wish to flip a switch, your cheer is brought to you via propane, which can be extracted from natural gas liquids found here in Pennsylvania. Propane is also a foundational chemical used as a petrochemical feedstock for a variety of applications and products.

9. Connecting with loved ones far and near: From rare earth metals in the glass display to epoxy resins for printed circuit boards and polymer coatings to protect devices from
moisture and dirt, chemistry is a key part of our homes and mobile devices that keeps us connected so we can still celebrate with loved ones and share in the holiday spirit when distance keeps us apart.

Not only does the chemical industry provide the products we use every day, but it is one of the largest manufacturing industries in the world.

From PCIC and the approximately 80,000 chemical industry employees in Pennsylvania, we’re proud to provide the chemistry and products that help make the season merry and bright. We wish you a very happy holiday!